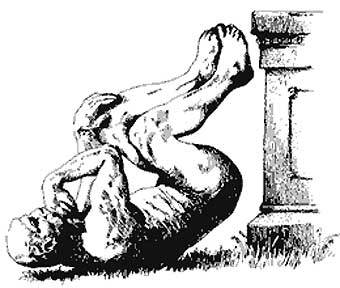 PHYSICS: John Mainstone and the late Thomas Parnell of the University of Queensland, Australia, for patiently conducting an experiment that began in the year 1927 — in which a glob of congealed black tar has been slowly, slowly dripping through a funnel, at a rate of approximately one drop every nine years.
REFERENCE: «The Pitch Drop Experiment,» R. Edgeworth, B.J. Dalton and T. Parnell, European Journal of Physics, 1984, pp. 198-200.
WHO ATTENDED THE IG NOBEL CEREMONY: John Mainstone

MEDICINE: Gregg A. Miller of Oak Grove, Missouri, for inventing Neuticles — artificial replacement testicles for dogs, which are available in three sizes, and three degrees of firmness.
REFERENCES: US Patent #5868140, and the book Going Going NUTS!, by Gregg A. Miller, PublishAmerica, 2004, ISBN 1413753167.
ACCEPTING: «The winner was unable to travel, and deliverd his acceptance speech via videotape.»

LITERATURE: The Internet entrepreneurs of Nigeria, for creating and then using e-mail to distribute a bold series of short stories, thus introducing millions of readers to a cast of rich characters — General Sani Abacha, Mrs. Mariam Sanni Abacha, Barrister Jon A Mbeki Esq., and others — each of whom requires just a small amount of expense money so as to obtain access to the great wealth to which they are entitled and which they would like to share with the kind person who assists them.

PEACE: Claire Rind and Peter Simmons of Newcastle University, in the U.K., for electrically monitoring the activity of a brain cell in a locust while that locust was watching selected highlights from the movie «Star Wars.»
REFERENCE: «Orthopteran DCMD Neuron: A Reevaluation of Responses to Moving Objects. I. Selective Responses to Approaching Objects,» F.C. Rind and P.J. Simmons, Journal of Neurophysiology, vol. 68, no. 5, November 1992, pp. 1654-66.
WHO ATTENDED THE IG NOBEL CEREMONY: Claire Rind

ECONOMICS: Gauri Nanda of the Massachusetts Institute of Technology, for inventing an alarm clock that runs away and hides, repeatedly, thus ensuring that people DO get out of bed, and thus theoretically adding many productive hours to the workday.
WHO ATTENDED THE IG NOBEL CEREMONY: Gauri Nanda

FLUID DYNAMICS: Victor Benno Meyer-Rochow of International University Bremen, Germany and the University of Oulu , Finland; and Jozsef Gal of Loránd Eötvös University, Hungary, for using basic principles of physics to calculate the pressure that builds up inside a penguin, as detailed in their report «Pressures Produced When Penguins Pooh — Calculations on Avian Defaecation.»
PUBLISHED IN: Polar Biology, vol. 27, 2003, pp. 56-8.
ACCEPTING: The winners were unable to attend the ceremony because they could not obtain United States visas to visit the United States. Dr. Meyer-Rochow sent an acceptance speech via videotape.